Why 10 Is The Best Number Ever! 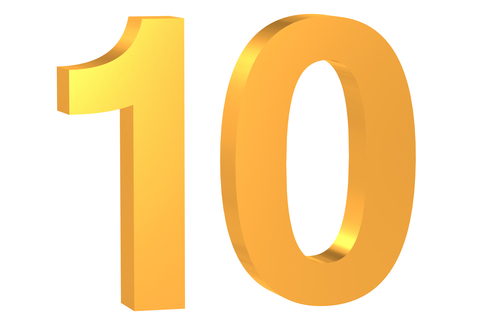 In today’s blog, I’m choosing to do something a little out of character. For the first time, I’ll be composing a blog completely in the first person. This isn’t something I tend to do. As an English Major, my academic career was comprised of writing essays for teachers and professors who insisted that I never use the first person narrative. I’ve continued this tradition into my blogging career.

As MeloTel’s Editor In Chief, I consider it my job to compose website content that is representative of the MeloTel team as a whole. I do the same for each of my blogging clients. As a result, my blog posts contain the pronoun “we”. For today, however, that changes for a special reason.

It’s my favourite number. Perhaps, it has something to do with the fact that I was born on the 10th of June. Okay, it totally has to do with being born on the 10th of June. But my birth date was only the beginning. At the age of 10, I discovered my true calling as a writer and performer of music. My shoe size is 10. And, it just so happens that I’ve been a proud member of the MeloTel team for 10 years.

On January 4th, 2019, MeloTel will celebrate its 10th anniversary. Evidently, this 10 thing isn’t just cool to me. It is celebrated worldwide as a symbol of greatness. Think about it. How many times have people discussed their “Top 10” lists? Specifying something as belonging in your “Top 10” indicates its presumed greatness. How do you judge perfection? By giving it a 10 out of 10!

I’d like to offer my personal congratulations to the MeloTel team!

To be in business for 10 years is an excellent achievement. I’m grateful that, over the past decade, I’ve been given the opportunity to work alongside some very talented individuals, without whom I’d be unable to do my job. Michael Paz has been particularly exceptional in assisting an absolute technical imbecile like myself to overcome numerous computer issues. His work as MeloTel’s Customer Service Supervisor has been invaluable.

I’m also hard pressed to name a more kind and accommodating co-worker than our Administrative Assistant, Chantel Cascanette. Incredibly organized and dependable, there’s not an inquiry she won’t quickly address with a warm smile.

MeloTel’s Founder and CEO, John Meloche deserves the highest praise for being the head of our proverbial Voltron. I can’t thank him enough for putting so much stock in my talents and supporting me in literally every facet of my life. He is more my friend than my employer. I’m indebted to him for more than I have the time and space to mention.

Almost every year, I attend a Toronto Blue Jays game on my birthday. They’ve long been my favourite team playing my favourite sport and birthday games have pretty much been a tradition for decades. On June 10, 2016, the Jays and Orioles were tied 3-3 going into the 10th inning. Shortly after 10:00 p.m. EST, Blue Jays designated hitter, Edwin Encarnacion, who wore #10, stepped to the plate and belted a walk-off home run.

I saw this all live sitting in seat 10 of the 10throw of the upper deck. Totally true story. 10 is the best! To my entire MeloTel team, I offer my congratulations on the amazing milestone of the company’s 10thanniversary. And to John, thank you for having me be a part of it. Here’s to the next 10 years!