Waging War On The Web 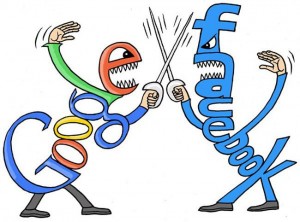 You just got the sense that things like this were bound to happen more frequently. With all the talk about Wikipedia shutting down last week in a bid to protest SOPA lately, you had the feeling that the “internet wars” were only just beginning. It appears as if the world wide web has gone the way of hip-hop, in that it has become the home to some interesting battles.

These battles, however, are not conducted on a microphone. Instead, the internet itself has become the venue for online superpowers to duel it out. This time around, it appears as if search engine juggernaut Google is scrapping it out with social networking champion, Facebook for the rights to be your go-to source for information online.

As The Toronto Star‘s Lesley Ciarula Taylor reported yesterday, Google is being accused of practicing an unfair monopoly over other search engines. So much so, says Taylor, that the U.S. Federal Trade Commission is investigating the extremity of the claims against Google.

This new online war seemed to have been declared on January 10th when Google released “Search Plus”. This new tool scours the web through Google and Google Plus eliminating such sites as Facebook and Twitter from its search. Engineers over at Facebook insist that this isn’t fair.

As part of their counterattack, a collective group of engineers who work for various social networking websites have launched Focusontheuser.org. The home page calls out Google by insisting that it allows for social searches to draw results from all over the internet.

The creation of this website has caused quite the stir in the online community. Taylor reports that Wired co-founder John Battelle interviewed Facebook’s Director of Product and Firefox creator, Blake Ross to get his take on the entire ordeal. Ross indicated that there are pretty big implications for such a group to start such an initiative.

Said Ross: “It’s one thing for a lone hacktivist to do this, it’s quite another for a member of the Internet Big Five to publicly call Google out. Facebook would need to vet this with legal, with management (this clearly had to pass muster with Mark Zuckerberg) and, I was told, Facebook wanted to reach out to others — such as Twitter — and get their input as well.”

According to the Focusontheuser site, Google unfairly sends online users to sometimes-obsolete Google-run sites instead of more relevant Facebook or Twitter pages. So if fans are looking to research their favourite celebrities, for example, they won’t always be pointed in the most appropriate directions. We’ll continue to follow this war.