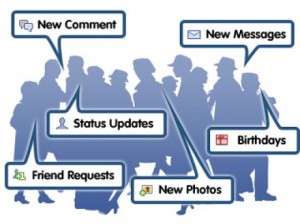 Utilizing social networking websites to promote your business is pretty much a necessity these days. It’s no longer simply considered a good idea to get online to spread the word about your company. It’s practically integral to your success. It’s no secret that MeloTel often provides updates on both our Facebook and Twitter pages.

Each and every one of our blogs are posted on each page in an effort to keep all of our fans and followers regularly updated. In addition, it’s important to create as many links as possible to your business website in order to generate more traffic. Blogging and social media posts work in tandem to generate more business.

Social networking is a key ingredient in the marketing campaign of just about any business that is looking to get ahead. But Facebook and Twitter, as we all know, is not used for business purposes alone. The majority of people who log on each day do so for personal reasons. Many seem to have no problem divulging some very personal information about themselves.

This is done through both status updates as well as pictures and videos. Some people forget, it seems, that if they are seeking employment, their Facebook and Twitter profiles may be used as virtual references. The practice of business owners reviewing social media pages of potential employees has been known to make or break a job opportunity or two in the past.

One particular employer recently took this practice to a whole new level. According to an Assoiated Press report published by The Toronto Star yesterday, a New York statistician refused a job when his interviewer asked him for his Facebook login information. In what many believe to be highly private information, one’s password is generally never asked for.

But in the case of Justin Bassett, this intrusive request cost him a job opportunity. It was not information that he was willing to part with. And who could blame him? According to the Associated Press, however, this is information that more and more employers are seeking these days.

Why should companies be asking for such private information? According to the article, “In their efforts to vet applicants, some companies and government agencies are going beyond merely glancing at a person’s social networking profiles and instead asking to log in as the user to have a look around.”

Orin Kerr, a George Washington University law professor calls the request “an egregious privacy violation” that is “akin to requiring someone’s house keys.” And while we agree that handing over your Facebook login information is a bad idea, we remind all job seekers to keep their profiles as professional as possible if you are seriously looking for employment. Good luck!